The ninth edition of Kritya International Poetry Festival was held from November 16 – 18, 2014 at the Vyloppilli Samskriti Bhavan, Thiruvananthapuram. The venue was in all respects ideal for such a function, being dedicated to the renowned Malayalam poet Vyloppilli Sreedhara Menon. The festival theme was “Enlightenment through Poetry” and sought to explore the enlightening and uniting aspect of poetry and its sister arts, and how art as a medium could be put to constructive use on an individual as well as on a collective basis.

Around 25 poets, from India and other countries around the world participated in the festival, acknowledged as one of its kind for the excellent quality of poetry presented and the unique camaraderie it inspired among the participants. Apart from well-known poets from different states of India, Kritya 2014 hosted established poets from the United States, Switzerland, Thailand, Latvia, Iceland, Finland, Germany, France, Botswana, Netherlands, Ireland, Israel, Cyprus, Sweden, and Spain.

The festival began on November 16th, 2014 with a Theyyam performance by the Kerala Folklore Akademi, which held the audience spellbound and inspired in them awe and reverence for this traditional folk art form and everything it symbolized. Dr. Jayasree Ramakrishnan, Editor, Kritya introduced this art form and the artistes to the audience. The artistes actively engaged with the audience and invited them to dance with them. The performance was well accepted by the audience to whom it was a memorable and stirring experience. Dr. Rati Saxena, Festival Director, Kritya delivered the opening speech and welcomed the participants, audience, media and others. The formal inauguration was done by lighting the lamp, and as always and typical of Kritya, all the participating poets and artists were invited on to the stage to take part in the ceremony of lighting the lamp.

The first session was held from 11.30 AM, in which Prof. Sugatha Kumari, eminent Malayalam poet and environmentalist was expected to attend. She could not participate in the festival due to the unfortunate demise of her much loved sister Prof. Hridaya Kumari. However, Richard Jackson (USA), Ingrid Fitchner (Switzerland), Pornpen Hantrakool (Thailand), and Liana Langa (Latvia) took part in the first session and presented their poems. The poems were read out in the poets’ own language, the English version was projected on stage, and their Malayalam renderings were read out by students from various colleges and schools in the city. The Malayalam translations of the poems in this session were done by Indira Sadanandan and Karunakaran.

The group dispersed for lunch at 1 P.M after the 1st session.

The second session “On Poetry and Poets” was held from 2 PM to 3 PM in which Kristian Guttesen (Iceland), Kamal Vora (Gujarat), Seth Michelson (USA) and Augusta Laar (Germany) presented their perspectives of poetry. After tea, the third session on “Poetry Reading” was held from 3.30 PM to 5 PM. Savithri Rajeevan (Kerala), Anil Boro (Assam), Amir Or (Israel), Nese Yasin (Cyprus), and K. Satchidanandan (Kerala) presented their poems. Malayalam translations of the poems in this session were done by Savithri Rajeevan and Indira Sadanandan.

The fourth and last session of the day was “Poetry Performance” held from 5.30 PM onwards. Participants were Marc Delouze from France and Berry Heart from Botswana both of whom took poetry to a new level and touched the audience’s hearts with their amazing performances.

The day concluded with a dinner hosted by the Goethe-Institut, Thiruvananthapuram.

The second day of the festival 17th November 2014 began with the Poetry Reading session (10.00 AM to 11.00 AM). V. Madhusoodanan Nair, renowned Malayalam poet started the session by reading out Prof. Vishnu Narayanan Namboothiri’s poem. Prof. Namboothiri, acclaimed Malayalam poet and litterateur, could not attend the function on account of ill health. Then Madhusoodanan Nair read out his own poems in his characteristic and popular style. Other poets who presented poems in this session were Sreekumaran Thampi (Kerala, India), Erik Lindner (Netherlands), and Mithilesh Shrivastava (India).

The second session (11.30 AM to 1.00 PM) had Neela Padmanabhan (India), Sudeep Sen (India), S. Joseph (India), and T.P. Rajeevan (India) as participants. The third session after lunch was held from 2 PM to 3. 30 PM. This was on “Poetry and Poets” and the poets Amir Or (Israel), K. Satchidanandan (India), Pornpen Hantrakool (Thailand), Richard Jackson (USA), Ingrid Fichtner (Switzerland), Erik Lindner (Netherlands) and March Delouze (France) spoke on their poetic craft. In the Poetry Reading session that followed, Seth Michelson (USA), Par Hansson (Sweden) and Kamal Vora (India) read out their poems. The audience also listened to their Malayalam translations. Zulema Moret, famous poet from Spain could not attend the festival because of Visa problems. She sent audio recordings of her poems, to which the audience listened in her absence. The last program of the day was poetry performance by Rati Saxena (India) and Augusta Laar and Kalle Laar (Germany). Their performances were very impressive, giving new meaning and expression to poetry.

The festival participants were treated to a dinner by the Alliance Francaise de Trivandrum.

The last day of the festival 18th November, 2014 once again commenced with a Poetry Reading session 10 AM – 11 AM. In this session Veeran Kutty (India) and Kristien Guttesen (Iceland) presented their poems. Tua Forsstrom (Finland) could not attend the festival due to health issues. Her poems were read out by Par Hansson (Sweden). The second session (11.30 AM – 1 PM) of the day was “On Poetry and Poets” in which the audience were enlightened on the art of poetry by the poets Liana Langa (Latvia), Nese Yasin (Cyprus), Anil Boro (India), Par Hansson (Sweden), Sudeep Sen (India) and Berry Heart (Botswana).

The 3-day Kritya International Poetry Festival concluded with the valedictory function which was presided over by Perumbadavom Sreedharan, well-known Malayalam novelist and President, Kerala Sahitya Akademi. The Chief Guest for the occasion was Rani George, Secretary, Cultural Affairs Department, Kerala. Smt. Rani George, Shri Perumbadavom Sreedharan, poets Richard Jackson from the US, Liana Langa from Latvia and Kamal Vora from India, lighted the lamp along with Kritya representatives.

In his speech, Perumbadavam Sreedharan expressed his love of poems that helped him relax. He highlighted the fact that poets fight against the cruelties and injustices in the world and give expression to the helplessness of innocent people through their verses. Rati Saxena, Festival Director, welcomed the audience and presented a report on the festival. A selection of the poems presented during the festival was compiled as a book “Variant Vibrancies” edited by Dr.Jayasree Ramakrishnan Nair and Shubhrastha Shikha. Dr. Rati Saxena requested the Kerala Sahitya Akademi to publish a compilation of the poems that have been translated into Malayalam.

Dr. Thankamony Amma, trustee of Kritya gave the vote of thanks.

The day concluded with a dinner hosted by the Ministry of Culture, Government of Kerala. 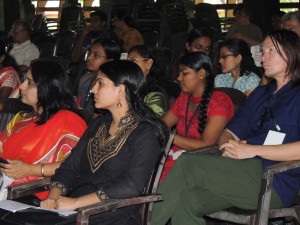