Kritya has taken her first step into the vast expanse of the world of poetry in June -2005.To mark Kritya’s achievement we organized a “celebration of poetry” or poetry festival at the Museum Auditorium in Thiruvananthapuram, Kerala.

As we know, poetry, the oldest form of literature, is always kept alive in other art forms like drama, dance, music and even painting. So we celebrated it by singing, acting, talking and painting poetry.
Dr. Ayyappa Paniker, the eminent poet who put Malayalam poetry in the world arena and brought the world literature to Malayalis, inaugurated the function by reading poetry.
Kavalam Narayana Paniker who has given a new grammar to Indian theatre, was the chief guest and he read his own, and Ayyappa Paniker’s poems.
B. D Dethan, a great painter from Kerala who has combined the tradition of Indian and western painting, painted on the spot while the poems were being rendered.

Kavalam read ‘Seethamaareecham Kilippaattu’ by Dr. Ayyappa Panicker, based on the famous Ramayanam episode. Modelled on the lines of the traditional Kilippaattu by Thunchan, complete with Phalashruthi, this set the tone for the play on the same subject staged by the Sopanam troupe. Imbued with the distinct flavour that is characteristic of Kavalam’s productions, it captivated the audience. Particular mention needs to be made of the Ravana by Gireeshan.
The short stories of Amrita Preetam have an earthy tang and several of them feature the travails of the woman subjugated by the patriarchal society.

This issue came alive in Neeta Mohindra’s solo performance, an adaptation of one of these stories. The protagonist, a seller of pots, observes that the life of a woman, irrespective of the strata of society she belongs to, is much the same, one of exploitation. The array of emotions that flashed on her face and the freedom from restraints were proof enough that the Spartan props on the stage did not fetter the accomplished artiste.

The inaugural function was followed by a captivating drama presentation based on the famous Sanskrit Drama “Ashcharya choodamani,” by Sopanam Troupe. Punjabi artist Neeta Mahendra acted out Amrita Preetam’s story “Kori Handi” (the unsullied mud pot), which was hailed as a brilliant performance. This was followed by Rabindra Sangeet by Pallavi Krishnan. D.Vinayachandran, a famous poet of Kerala, read out one of his poems. Rendering of the poems of Pash and Rati Saxena( the editor of Krity

a) constituted the grand finale. The festival of poetry turned out to be an experience of the essence of poetry involving all the senses and the sensitivity of the heart – a Jugalbandi of reading, acting, painting and singing. A combination of Rasa, Raga, and Rhythm in different colours.

Prabhakar Chitrakaar was from Chattisgarh. I might have met him in Dhamatari sometime after a poetry reading, but I don’t remember his face. He wrote to me that he liked my poetry and wanted to paint on them, as my poetry talks to him. He started sending me paintings on my poems one after another along with brief letters. When I dreamt of Kritya, Prabhakar’s paintings were in my mind. I wrote to him about it, but there was no reply, the first issue of Kritya came out with his paintings, but Prabhakar was strangely silent. Now I have come to know from a letter sent by his wife Vimala, the reason for his uncanny silence. He is no more in this world to paint my poems. 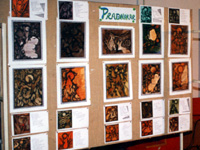